On hot days especially, you may see a car stopped on the roadside with its hood raised and steam or smoke billowing from the engine bay. In this case, the car has overheated, which often happens due to the combination of extreme heat and a preexisting maintenance issue. If a problem isn’t caught in time and the vehicle overheats, it can lead to catastrophic engine failure and costly repairs.

But can electric cars overheat? Not in the same way that non-electric vehicles do, but motorists should always take precautions for the sake of heat management, regardless of the components that motivate their vehicles. 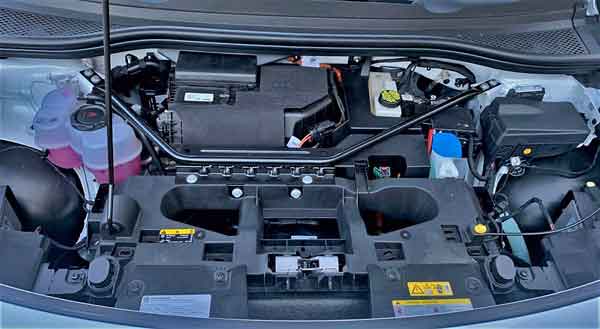 Internal combustion engines (ICE) — gasoline and diesel alike — are prone to overheating. Both types of engines rely on temperature regulation, which is enabled by motor oil that helps to lubricate and cool the engine.

But oil is just one component involved in regulating engine temperature. Coolant, also known as anti-freeze, works by moving liquid through various passages of the engine block. Powered by the water pump, the coolant absorbs heat from the engine and sheds it through the radiator system.

A broken water pump, insufficient coolant, cooling system leaks, a leaking radiator, a broken fan, a clogged heater core, a thermostat failure, blocked or split hoses, and broken belts can all contribute to cooling problems. Most of these issues are unique to ICE vehicles, but not all of them. To prevent these issues from occurring, it’s important to observe routine vehicle care and follow the owner’s manual for maintenance guidelines.

Unlike vehicles with engines, pure electric vehicles (EVs) come with one or more electric motors. We don’t include hybrids in this mix because they still utilize ICE systems and are prone to having the same problems. All Tesla models, the Nissan Leaf, the GMC Hummer, the Porsche Taycan, the Ford Mustang Mach-E and the Volkswagen ID.4 are included on the growing roster of full-electric models available.

Electric cars contain one or more motors, a battery pack, a single-speed transmission, a power electronics controller, a DC/DC converter, a 12-volt or 48-volt battery, and a thermal system for cooling. The last component is tasked with maintaining an even operating temperature for the electric motor(s), power electronics and other components. Electric drivetrains do have fewer parts than ICE models, but they also require care and maintenance.

Yes, electric cars can overheat. As batteries discharge, they generate heat, and under harsh conditions, the heat generated can be too much for the vehicle’s components.

The earliest modern models, such as the Nissan Leaf, relied on passive or forced air cooling methods, but a rash of battery fires with some designs proved that more complex cooling systems were better at preventing fuel cells from overheating. The term “thermal management” is widely used to describe cooling procedures for EVs.

Most current and proposed designs are liquid-cooled, with water-glycol systems being particularly popular. This “indirect system” circulates coolant through an arrangement of pipes to cool the battery in a way that’s similar to how the engine is cooled.

Heat pumps are another recent addition. They do a better job of heating and cooling the battery as well as redirecting heat to the cabin when warmth is needed. If the heat pump fails, it could cause an EV to shut down, so always pay attention to an EV’s readouts to ensure that all systems are operational.

Heat and Your EV

Even if your EV is sufficiently cooled, there is another area of performance that can be affected by high temperatures: vehicle range. The optimum range numbers are typically reached when the system temperature stays at a moderate 70 degrees Fahrenheit consistently.

Extreme heat or cold can impact range and battery life. A University of Michigan report warns EV users to avoid extreme temperatures when the battery is low and the vehicle isn’t plugged in. In addition, parking in the shade on hot, sunny days can tax the battery system less, extending its life.

Check out all the coolant and cooling system accessories available on NAPA Online, or trust one of our 17,000 NAPA AutoCare locations for routine maintenance and repairs. For more information on automotive heating and cooling, chat with a knowledgeable expert at your local NAPA AUTO PARTS store.

The post Can Electric Cars Overheat? appeared first on NAPA Know How Blog.